On Art and Resistance in Ukraine

On Art and Resistance in Ukraine

In order to counter and to question the increasing fatigue and apathy which can be observed in Germany and Western Europe concerning the topic of the Russian war in Ukraine we invited Ukrainian artists, curators, and art historians to share their knowledge and work. All in all, three events will center around topics such as the role of moving images in times of war, recent developments in Ukrainian contemporary art, and decolonial approaches to this field.

We hope to enable a dialog about these pressing topics at Universität Hamburg. Since epistemic violence is one of the mechanisms of imperialist and colonial power and warfare, true solidarity and resistance require attentive listening to the oppressed and continuous support in their attempts in regaining their own subjectivity.

Therefore, the events we have organised are an attempt in collective action to reflect on the blind spots and myths that can be found in Western contexts regarding contemporary Ukrainian art as well as art historiography – past and present – in the face of the Russian full-scale invasion.

Film screening followed by Q&A with the director

In the multiple award-winning Sundance Film Festival movie The Earth Is Blue as an Orange an Ukrainian family documents their life under siege, and a professional filmmaker is following along.

Iryna Tsilyk, a writer and filmmaker from Kyiv, Ukraine, has directed several short fiction and documentary films. For her debut multiple award-winning full-length documentary The Earth Is Blue As an Orange she received among other things the Directing Award: World Cinema Documentary at the Sundance Film Festival 2020. Rock. Paper. Grenade, her first full-length fiction movie will be premiered this autumn at the Warsaw film festival. Iryna is a member of the artistic team of the Invisible Battalion, a global advocacy project dedicated to researching and documenting the participation of Ukrainian women in the war against the Russian army.

Mariia Vorotilina, Kyiv, Ukraine / Hamburg, Germany, studied social sciences at Kyiv-Mohyla Academy. Since October 2018 she has been part of the communication team at Kampnagel Hamburg and has been curating the :::VOICES:::Ukraine programme, a project of Alliance of International Production Houses. 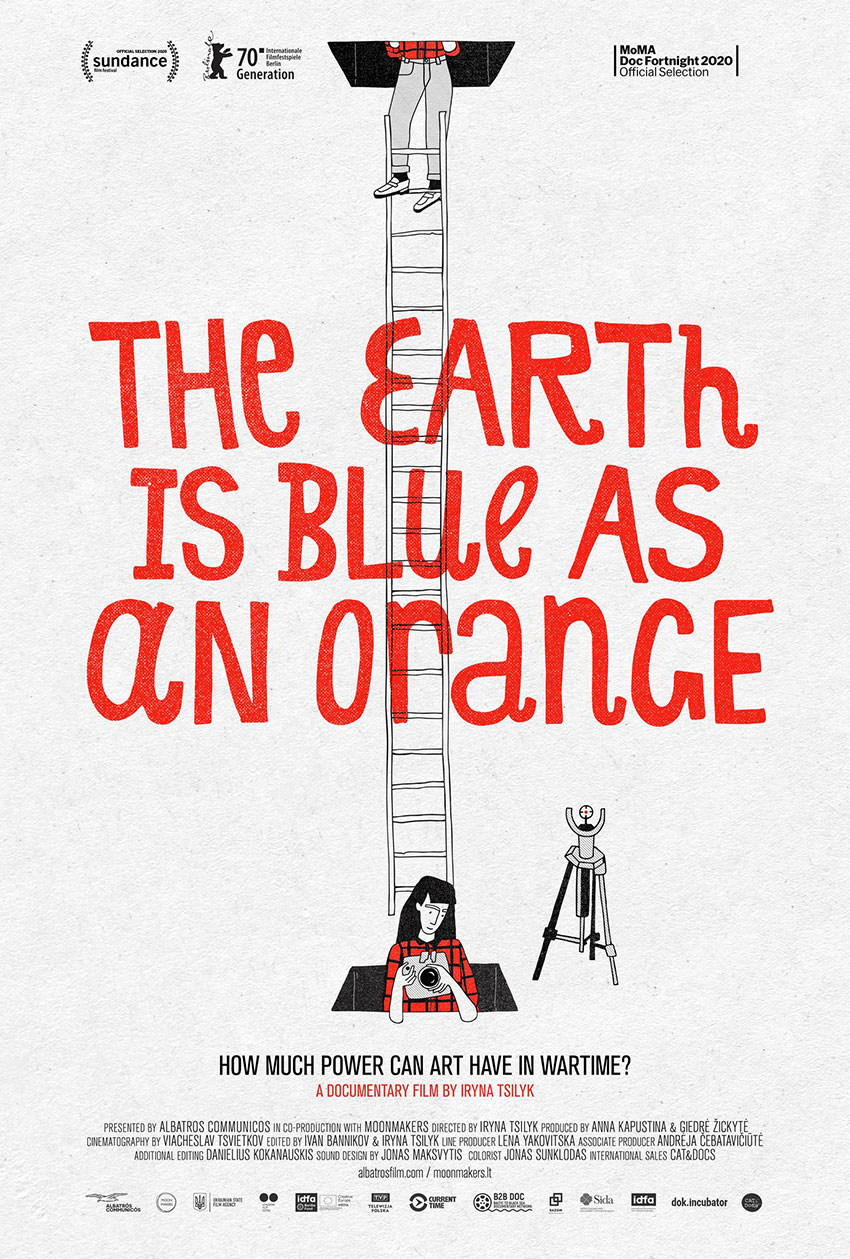 Revolution at War: Art and Politics in Ukraine

Vasyl Cherepanyn will analyse the cultural and political processes in Ukraine since the Maidan revolution in 2014 until Russia’s ongoing full-scale invasion of the country. The talk focuses on the functioning of art institutions under conditions of war and occupation and investigates the realm of memory politics and culture of remembrance in Europe’s East in light of the experiences of imperialism, authoritarianism and the processes of decolonisation.

Vasyl Cherepanyn is Head of the Visual Culture Research Center (VCRC), an institution he co-founded in Kyiv in 2008 as a platform for collaboration among academic, artistic, and activist communities. He holds a PhD in philosophy (aesthetics) and has lectured at the National University of Kyiv-Mohyla Academy, European University Viadrina in Frankfurt (Oder), University of Helsinki, Free University of Berlin, Merz Akademie in Stuttgart, University of Vienna, Institute for Advanced Studies of the Political Critique in Warsaw, and University of Greifswald. He was a visiting fellow at the Institute for Human Sciences in Vienna in 2016. He coedited Guidebook of the Kyiv International (Medusa Books, 2018), ‘68 NOW (Archive Books, 2019), and curated The European International (Rijksakademie van beeldende kunsten, Amsterdam, 2018), Hybrid Peace (Stroom, The Hague, 2019), and Armed Democracy (2nd edition of Biennale Warszawa, 2022), among others. VCRC has been the organizer of the Kyiv Biennial (The School of Kyiv, 2015; The Kyiv International, 2017; The Kyiv International—‘68 NOW, 2018; Black Cloud, 2019; Allied, 2021) and a founding member of the East Europe Biennial Alliance. VCRC received the European Cultural Foundation Princess Margriet Award for Culture in 2015 and the Igor Zabel Award Grant for Culture and Theory in 2018.

Two-Fold Decolonial War in Ukraine: Images of Emancipation and Resistance

Through looking at the origins of the decolonial discourse and its use in South America and Africa, I want to argue its applicability to Ukrainian (and in a wider context, Eastern European) context. I suggest analysing the knowledge- and image-generating power relations between Ukraine and Russia, as well as Ukraine and ‚the Global West‘, in order to see Ukrainian resistance from 2014 on as an emancipatory struggle for owning one’s agency, voice, and identity. In the course of this lecture, I will trace the changes in artistic attitudes and approaches after Maidan and their role in the current stage of the war.

Ukraine’s New Art in a Time of War: Dismantling the Colonial Narrative

The presentation focuses on how Ukrainian artists challenge and dismantle longstanding Russian colonial narratives in their art produced after the beginning of the full-scale invasion on 24 February 2022. It examines how artists work with contested historical memory, dispute Ukraine’s belonging to the post-Soviet space, and address the ongoing trauma through both decolonial perspective and anti-colonial resistance. The presentation also discusses the role of art activism and the place of politically and socially engaged practices in the particular decolonial turn that follows the outbreak of violence brought about by the full-scale invasion. It proposes a classification of colonial narratives in the particular case of Ukraine, in order to create a typology of methods and practices of resistance employed by the artists in their works.

Kateryna Botanova is a Basel-based cultural critic, curator, and writer from Kyiv, Ukraine. Her main focus is on culture as an agent of social change. Since 2015, Kateryna is a co-curator of the multidisciplinary cultural festival CULTURESCAPES (Basel, Switzerland) and an editor of festival anthologies. She was a director of the Center for Contemporary Art (SCM) in Kyiv and an editor-in-chief of a cultural online magazine KORYDOR. Since 2014, she writes and lectures extensively on decolonial and emancipatory discourse in the visual arts and cultural field in Ukraine.

Svitlana Biedarieva is an art historian, curator, and artist. Her current main research focus is contemporary Ukrainian art, decoloniality, and ongoing Russia’s war on Ukraine. She also works with selected topics of Eastern European and Latin American art. In 2019–2020, she curated the exhibition At the Front Line. Ukrainian Art, 2013–2019 in Mexico and Canada. She is the editor of Contemporary Ukrainian and Baltic Art: Political and Social Perspectives, 1991–2021 (Stuttgart: ibidem Press, 2021) and co-editor (with Hanna Deikun) of At the Front Line. Ukrainian Art, 2013–2019 (Mexico City: Editorial 17, 2020). She has published critical texts on Ukrainian art in such academic and media outlets as October, ArtMargins Online, post at MoMA, Revue Critique d’Art, Financial Times, Hyperallergic, and The Art Newspaper, among others. In 2022, she was selected as the CEC ArtsLink International Fellow (hosted by the University of Kansas) and the Visiting Fellow at the Institute for European, Russian, and Eurasian Studies at the George Washington University. She holds a PhD in History of Art from the Courtauld Institute of Art, University of London.

All events will take place in English.

This series of events is supported by Liebelt-Stiftung, Hamburg.